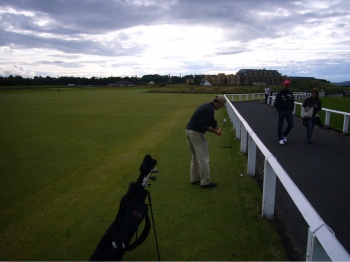 Play It As It Lies — The Minimalist Manifesto

It's actually Rule 13-1, but it's the most fundamental tenet of golf — we play the ball as it lies. It's also the reason many see golf as a game which builds character, for it's good practice in life to have to accept responsibility for one's previous actions. You can blame anything you want for your errors — a bird chirping in your backswing, bad karma from a previous life, or just a bad lie — but then you have to go play the next shot from wherever you hit it.

Those running for President would have us believe that the spirit of golf is the American ideal, that we all have to negotiate the same course, and we get what we hit. It all sounds very good. But American golfers are suckers for unrealistic promises, just as voters are. We'll buy any new piece of equipment that promises another 20 yards. Our country clubs spend gratuitously to keep their courses in near-perfect condition. And in recent years, our architects spend millions to enclose and define every shot with mounds, while smoothing down every bump in the fairways, attempting to eliminate blind shots and bad bounces from the game.

The result? Instead of building character, we're raising a generation of coddled champions who can't even shrug off a bad lie and dig themselves out of a divot.

We see the evidence in major championships and the Ryder Cup, against foreign golfers who grew up on imperfect courses, and learned to deal with them. That's the way the game was invented — the original American ideal, that you can change your own destiny if you'll only work hard enough. In Scotland, the links have no trees to stop a wild shot from being swept away by the wind to perdition. But there are also none to stymie a potential recovery.

Since the 1950's, American golf design has gone away from that ideal. We seem to expect the course itself to mete out justice, with water hazards and bunkers placed in tough but fair positions; but then, we groom the bunkers to permit easy recoveries. Modern American golf design is modeled on the same principles as our ailing criminal justice system — we build more water hazards [prisons], but they only house the disadvantaged, while the elite receive suspended sentences.

But there a now a handful of American designers who see things differently. We've been called minimalists, but the essence of the movement is not in the limited use of earthmoving, so much as a return to golf's original values. These are:

One of golf's primary appeals is that it's a natural game, and it's more enjoyable when we are playing against natural hazards.

A variety of stances in the fairway is a key challenge of golf, and Nature is much better at providing this variety than the hand of man.

Shotmaking — the ability to control the flight of the ball — is the ultimate expression of golfing ability, and soft, flat greens reduce shotmaking to artillery practice.

Judgment of the shot is as important as execution, and defining the target areas with artificial mounding reduces the value of judgment. Except for visual barriers to eyesores off-site, earthmoving should be confined to features which come into play in the golf holes.

The sad part is that American golfers have become so used to pandering designs that they don't even understand some minimalist ideas. The whole point of golf architecture is to discover and then present to the player challenging shots inherent in the landscape, but today anything remotely challenging is quickly criticized as unfair. A green which tilts slightly away from the line of play is a natural challenge unto itself, but many golfers are so accustomed to having all the greens tilted back toward them to receive a shot that they believe a fallaway green is a gimmick.

Gradually, many of the things which can make a golf hole interesting have been removed from modern designers' palettes. Today, even our best designers seldom produce a great golf hole, because they apply so many standards of fairness that all their holes begin to look and play alike.

It's easy to talk about working with the land, but most architects use the land as an amateur interior decorator uses furniture, as raw material to be moved around the room until everything looks perfect. Many modern designers now pay lip service to minimalism, but then back away by saying that they seldom are given pieces of land with natural features to use, and that the concept is applicable to only 10% of new golf courses. Either they are wrong, or I am very lucky to keep finding land which allows it.

The minimalist's objective is to route as many holes as possible whose main features already exist in the landscape, and accent their strategies without overkilling the number of hazards. Sometimes, though, the best solution for the course as a whole may require major earthmoving on a handful of holes to connect the others. That's minimalism, too. And the key to success in those instances is to move enough earth to make the artificial work appear natural, not to move as little as possible.

In general, though, the minimalist moves earth to reduce severe slopes, not to create them. If you want to judge whether a particular designer is really comfortable in the minimalist style, ask him what he does when a hole has no natural feature to build upon. The real minimalist will respond that he's never faced that situation — he'll always find something, whether it's the length of the hole, or a small hump, existing vegetation, or simply the direction of the prevailing wind — and expand upon that to create an interesting golf hole.

For ALL book related inquiries, including orders, sales and availability, please contact Brian Lewis of Renaissance Golf Publishing via DoakGolf.com